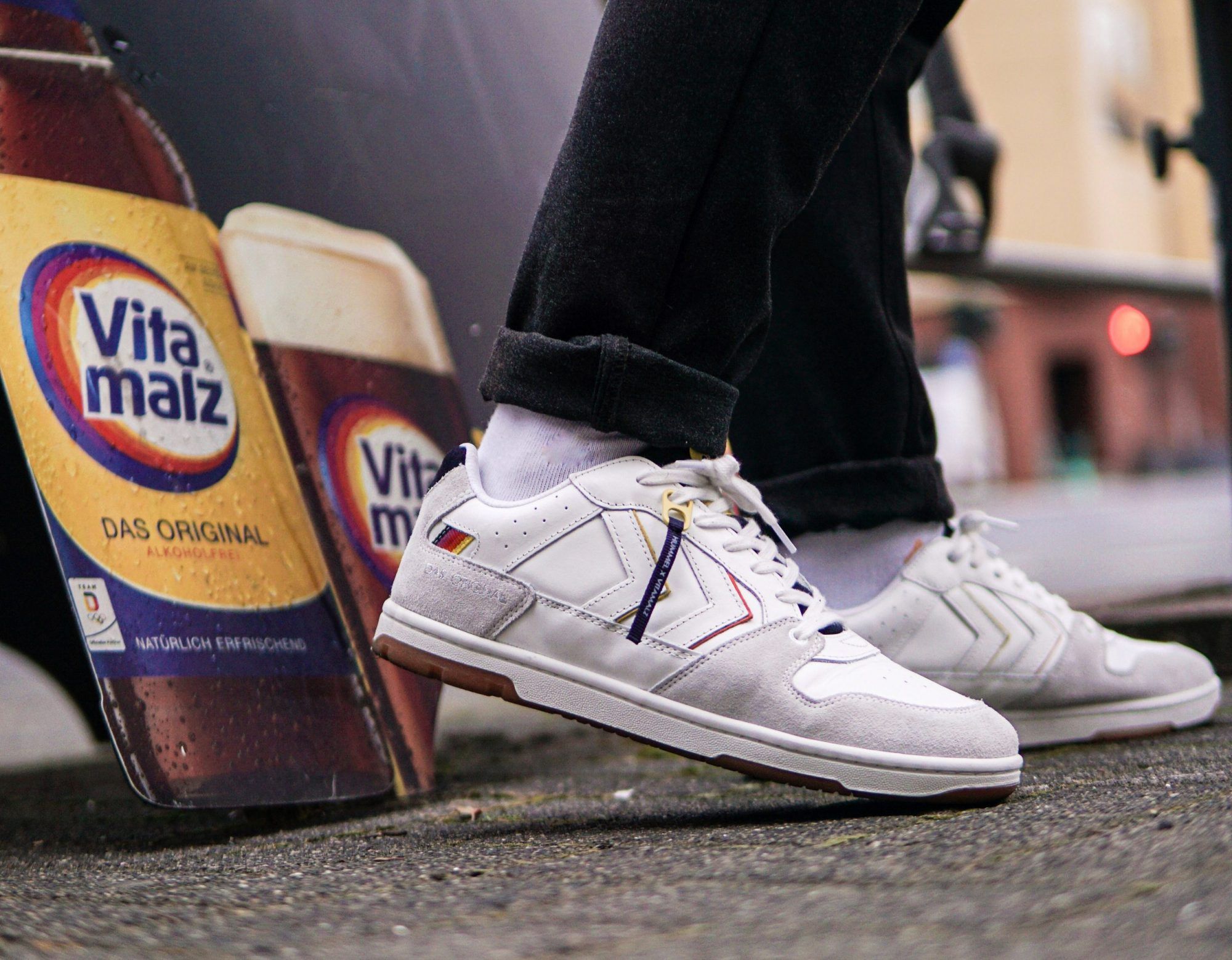 Danish sports giant Hummel, who managed to gain a faithful base of followers in the 2010s based on a string of exciting collabos and retros such as the Marathona, are back at it. Rather than collaborating with a sneaker boutique, however, the most recent effort sees them team up with German beverage brand Vitamalz to once again push the boundaries. Essentially, this is a coming together of almost centennial proportions, what with Vitamalz having being invented 100 years ago, and Hummel, too, approaching their 100 year anniversary in 2023.

The canvas on which Vitamalz and Hummel celebrate their collaboration is the Power Play, one of the latter’s best-known silhouettes from Hummel in the 80s. First introduced as a sports performance sneaker with a focus on tennis, the Power Play has figured centrally in the brand’s recent retro effort. Throughout the years, Hummel have experimented with different materials and novel colorways to modernise the model while also staying true to their heritage. The collaboration with Vitamalz is aligned perfectly within this rationale and achieves a harmonious union between classical and modern influences. More so, packaging, too is well executed, with the many details sure to delight sneakerheads.

For collabos, the colorway is the main distinguishing factor, and here the two brands have chosen a more subdued approach. Instead of dipping the whole shoe in the Vitamalz colors of yellow, Navy blue and the rainbow, the kicks come in a classic white that screams understatement. On this upper, the Vitamalz brand colors are then sparsely yet effectively used to enhance the overall look. For instance, the layer underneath the Hummel arrow on the side panel, the labelling on the tongue, the fabric on the back heel, and last but not least the insoles are all marked by the Vitamalz colors. This sophisticated approach allows for easy matching of clothes and makes the Power Play a perfect fit for all occasions.

Material-wise, the sneakers are mostly constructed out of white full grain leather with a touch of suede on the back heel, tongue, and on the toe guard. Even though the sneakers are constructed with mostly leather, the two brands employed fabric for the lining to maximise the 80s sports look. As a further nod to Hummel’s own tradition, they used a gum outsole (in a malty color of course!) that will certainly delight sneakerheads. Last but not least, the sneakers feature a can pull tab with Hummel and Vitamalz co-branding on the laces. Never seen before, it’s little things like this that tie the whole concept together. In sum, this pair strikes a fantastic balance when it comes to the use of colours, materials and the heritage silhouette.

Beyond that, the Hummel and Vitamalz teams also put a lot of thought into the packaging, which further elevates this collaboration. The first thing you will notice is the special box that comes courtesy of Ego Trips. Sturdier than your standard sneaker box, the lid contains magnets that allow for a seamless opening and closing sensation. Naturally, packaging is draped thoroughly in the Vitamalz colors. But there’s more, as every pair comes with a can of malt beer to quench your thirst, or at least try this classic German beverage if you never have!

In sum, the Hummel x Vitamalz Power Play is a great pair for those who want some 80s nostalgia, as well as die-hard malt beer fans. Sure to bring back childhood memories and a great conversation starter, this collabo has the potential to build bridges between different groups. At the same time, the simplistic approach also makes this a nice option as an all occasions go to pair. Be it at the beach or in the supermarket, you’ll look classy all the way. Two points to keep in mind when buying a pair though: one, in regard to sizing, go down half a size from your True-to-Size standard. Two, the leather used on the upper can be stiff in the beginning, but will soften after several wears.

The Hummel x Vitamalz Power Play releases August 6 and will retail for €110.