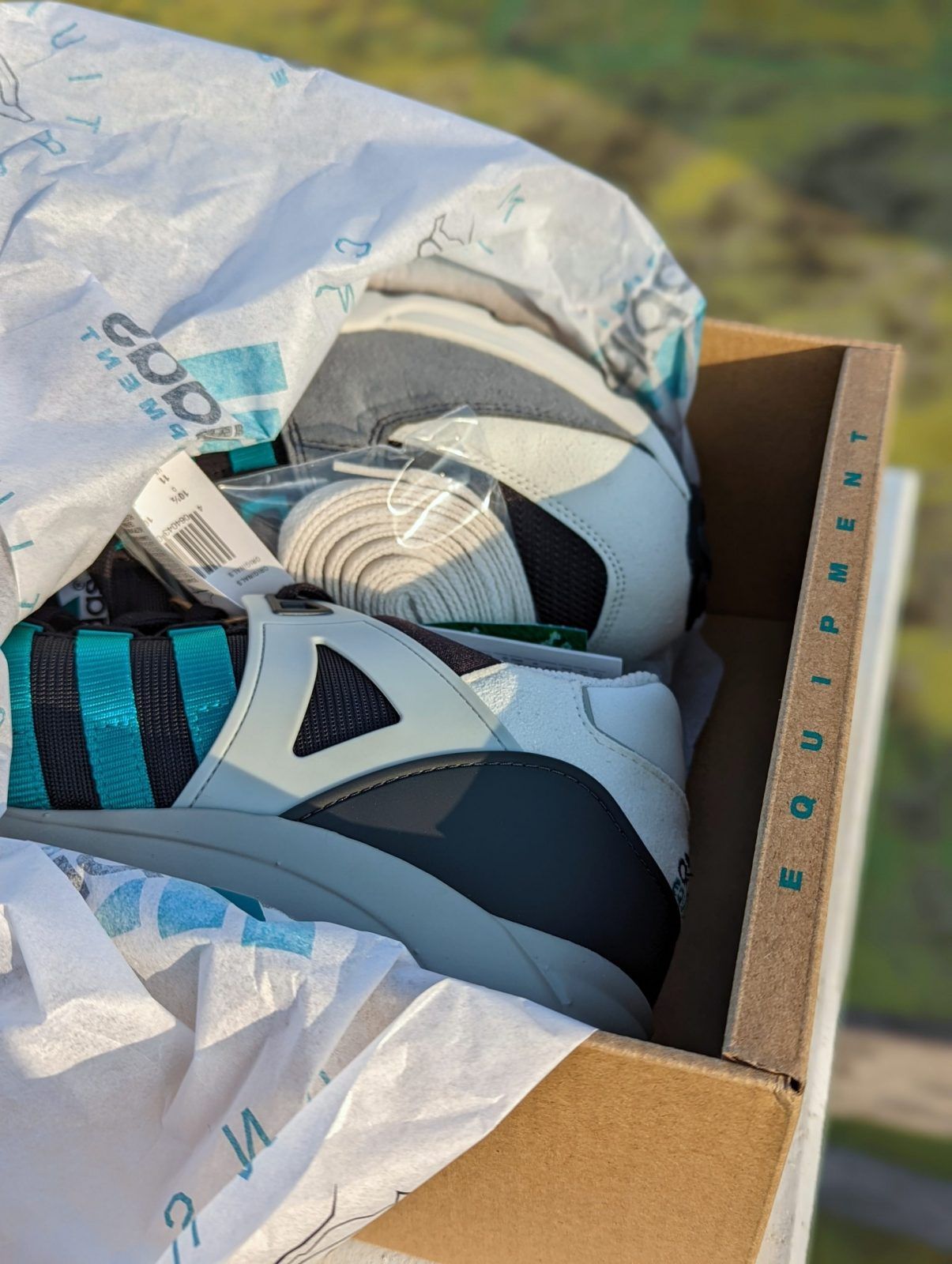 We may be a bit late to the EQT party, but then again, what does time matter when Womft? Vintage Fridays is all about showing appreciation for the past? So let’s take a closer look at the EQT range’s history and some specimens from the 30 years EQT anniversary recently released by Adidas. More precisely, in this quasi-historic review we will drool over the fan favorite „EQT Support 93“, the subtle yet elegant „Race Walk“, and the hitherto unreleased and quite polarizing concept creatively named „Equipment Prototype“.

Fresh off the heels of Adidas‘ two-year long ZX extravaganza, which began with the „30 years of Torsion“ campaign and ballooned into subsequent A-ZX craziness, this year’s „Life needs Equipment“ marketing cannot but feel a bit underwhelming. To be sure, there are some intriguing collaborations like Hanon’s fantastic Working Men’s Club rendition of the Race Walk, as well as a fancy website that was unveiled, albeit without much fanfare. As a whole, however, this lineup hasn’t yet transcended the realm of faithful Three Stripes aficionados much. Nor did the Herzogenaurach spaceship attempt to generate much hype by other means (artificial supply shortening anybody?) following the departure of their head of energy, Till Jagla.

But you know what, that’s totally fine! After all, the whole EQT range was always about a more subdued back to basics approach, about the shoes and the athletes, right? Welllll, actually this is a half-truth, because at its heart Adidas Equipment was essentially a stealthy marketing ploy hiding in plain sight behind athlete-centric design language. And more interestingly even, it was the Equipment range as marketing strategy that not only allowed Adidas a return to form as a sports brand, but also bestowed upon them much needed credibility to spearhead the then-nascent retro boom and thereby further propel sneakers into the lifestyle market.

See, back in the late 80s and early 90s Adidas found itself in a pickle of its own making, so to speak. Especially in the US, where they had been at the top spot for a brief period, they rapidly lost ground to the innovative teams from Nike and Reebok. Trying to make up for lost sales, Adidas released a plethora of models in a haphazard „throw at the wall and see what sticks“ kind of approach. They also sought to build upon their cultural status (think Run DMC shell toes) and further establish themselves as an iconic fashion brand. At the same time, however, they were limited in their actions by ill-balanced relations with sales partners, which often pursued agendas that were ultimately detrimental to Adidas‘ brand image. This lack of direction fully broke to the fore when Adi Dassler’s son Horst, who had led the company since Dassler’s death in 1978, suddenly passed away himself in 1987. By 1990, the Three Stripes had accumulated a whooping 72 million British Pounds in losses and teetered on the brink of bankruptcy.

It was then that Adidas took a closer look at their arch rival Nike’s success. Nike had overtaken Adidas in part by cultivating a focused image of athletic and technological prowess through smart advertising strategies. Finally seeing the light, Adidas poached two of Nike’s former execs, Rob Strasser and Peter Moore, i.e. the same guys who had laid the very marketing groundwork for Nike to overtake Adidas in the first place. What they came up with was the Equipment range, an iconoclastic re-envisioning of the company that went as far as doing away with the classic Trefoil logo. In essence, Strasser and Moore sought to create a foundational range that through its functional legitimacy as sports „equipment“ would pave the way for the rest of the range.

Although heralded as a return to Adidas‘ roots, the EQT range nonetheless was a novel approach at least on the marketing level as it leveraged athletic concerns for branding purposes. The most telling sign of this was of course the creation of a new logo and core colorway that came to define the brand throughout the 90s. More so, promotional materials, t-shirts and catalogs further retold the story of the company from Herzogenaurach. Moore and Strasser, who themselves continued to be coached by marketing consultants, then gathered a small team of faithfuls and had them not only work as a unity, but also made sure that these for members infused the form-follows-function philosophy and novel branding into all new designs. Additionally, rather than asking for feedback from key accounts, the EQT team would regularly seek input on their designs from sponsored athletes, which had hitherto been a criminally untapped reservoir.

Despite its espoused simplicity, the new range was far from cheap for Adidas at an estimated initial cost of USD100 million. Yet the overwhelming success achieved globally by this cohesive and extremely consistent range also allowed Adidas to rebuild the legitimacy of their own identity even as the company was overhauled radically. Rather than continuing as a manufacturer of athletic equipment, Adidas‘ European factories were closed, more production outsourced to East Asian subcontractors, and the company itself reinvented into a design and marketing firm by policy.

Nonetheless, the authenticity created by the EQT effort allowed Adidas to develop the casual market via retros of shell toes, Gazelles, Stan Smiths, to name just a few of the classic models. In other words, the supposed essentialism of the Equipment range laid the groundwork not only for Adidas‘ success in the lifestyle sector, but for the whole retro boom that took off in the nineties. Whereas Nike itself had become constrained by their image as athletic revolutionaries and technological leaders, Adidas and other brands such as Puma seized the opportunity to reinterpret older models as leisure wear. And this really is arguably the biggest part of the sneaker game now, where it is retros rather than progressive new tech that raises eyebrows. Some thirty years later, then, we have come full circle: the EQT range itself is celebrated openly as a historic line, complete with the first re-release of an inaugural model and two unreleased prototypes.

The EQT Race Walk has never been retroed following its original release in 1991 until now. This is somewhat surprising, as the clear cut silhouette is not only easy (read: cheap) to manufacture, but also lends itself as canvas to collaborations. At least for the casual market, this no-nonsense model should gather a sizable following if developed right. Originally an entry level shoe for casual athletes and race walkers in particular, this model provides almost no cushioning whatsoever. Nor does it feature a torsion bar, which would have been unnecessary for walkers In fact, its arguably most-advanced tech comes in the form of the grippy outsole, but that’s that!

What it is lacking in comfort, however, the Race Walk makes up for with its simplistic aesthetic. Basic, breathable materials for the upper, classic EQT green on the stripes, as well as very prominent branding on the tongue and the heel allow for great recognizability. More importantly even is the shape, which compared to other EQT models is almost slimline. Finally, unlike higher-end EQT models the Race Walk is surprisingly lightweight and can be worn without causing too much fatigue. Reasonably priced, but lacking any boons such as additional laces, this edition is the EQT model to get if you just need a new clobber for the weekend and want to show off some really 90s swag. Sizing is tts we think!

Whereas the Race Walk takes the back-to-basics approach to an extreme, the EQT Support 93 represents the true Equipment side of things. To be sure, compared to its similar-looking brethren Cushion and Guidance, all of which feature more advanced tech such as Impactcell heel cushioning or Dynprene forefoot shock absorption, the Support is slightly more basic thanks to its emphasis on stability.

The shoe itself was initially designed for overpronators and boasts the famous green torsion bar in what must be the biggest version ever. It also features an injection EVA mid for moderate cushioning (as long as you don’t compare it to Boost, because then these will feel like bricks). In order to allow for adequate support (get it?) on different surfaces, the original’s mid also employed a half-board construction that helped maintain forefoot stability while ensuring ample stability in the rearfoot section. This retro, however, features a standard stroble last.

Fit-wise is where this model shines even more, and it is here that form and function harmonize impressively. The three-stripes branding on the shoe’s laterals interlock with the lacing and thus actually serve a specific purpose. Moreover, the wrap-around tongue portrays the new logo all while ensuring a snug fit. The nylon mesh and leather upper provide sufficient breathability, but it must be pointed out that the shoe carries more weight and in general is visually more chunky (but never clunky). Another caveat: for people who are not overpronators the Support will take some time to get used to, as the foot bed to this reviewer at least appears somewhat unnatural. Nonetheless, this a classic model in the original EQT colorway and a must-have for fans, who will be delighted about the extra set of laces and consortium lace tags. Sizing is also tts (downsizing half a size should work).

Finally, the unreleased prototype, aptly named „EQT Prototype“. This is based off of a lightweight racing shoe the EQT team had planned to release back in 93, but which sadly never went into production. Well, until now that is, in a slightly slimmed down form that foregoes some of the more meaningful (but now arguably useless and difficult to scale) tech of the innovative original. For instance, this release opts for a basic pressure-molded EVA sole that is painted to give off the impression of the original’s dual-sensory EVA medial post; the torsion bar is luckily maintained. The rest, too, is basic leisure wear-level construction without any bells and whistles, but an educated guess would expect the original to have featured at least some additional cushioning in the heel or forefoot section similar to the EQT Cushion.

Design-wise, however, the Prototype is a breathtaking shoe, especially when positioned in its time. The upper is radically minimalistic thanks to its see-through mesh, which allows for maximum breathability during those hot summer runs. However, even as the mesh may get kinda loose, a good fit is provided by the idiosyncratic side panels, which are interlocked with the laces. More importantly, though, they are also part of the shoe’s wavey branding, which is then joined by the yet-again clear design language of the three stripes on the midsole’s central section. But details are taken even further, as both the toe box and the heel section feature reflective 3M elements reminiscent of the ZX10000C.

Here at Womft? we love the Prototype’s fresh look, but within the community this model appears to have brought forth the most divisive opinions. Then again, one can’t please everybody, right? However, arguably the biggest thing to keep in mind when thinking about buying these is that they run a cool size too big due to a) Adidas‘ famous inconsistent sizing (*cough* ZX7000 or ZX Candy Land anybody?) and b) the barebones upper construction. Be that as it may, definitely don’t brush these off as they will come in handy as a great pair of summer kicks come next year (or right now if you’re in the Southern hemisphere that is!).