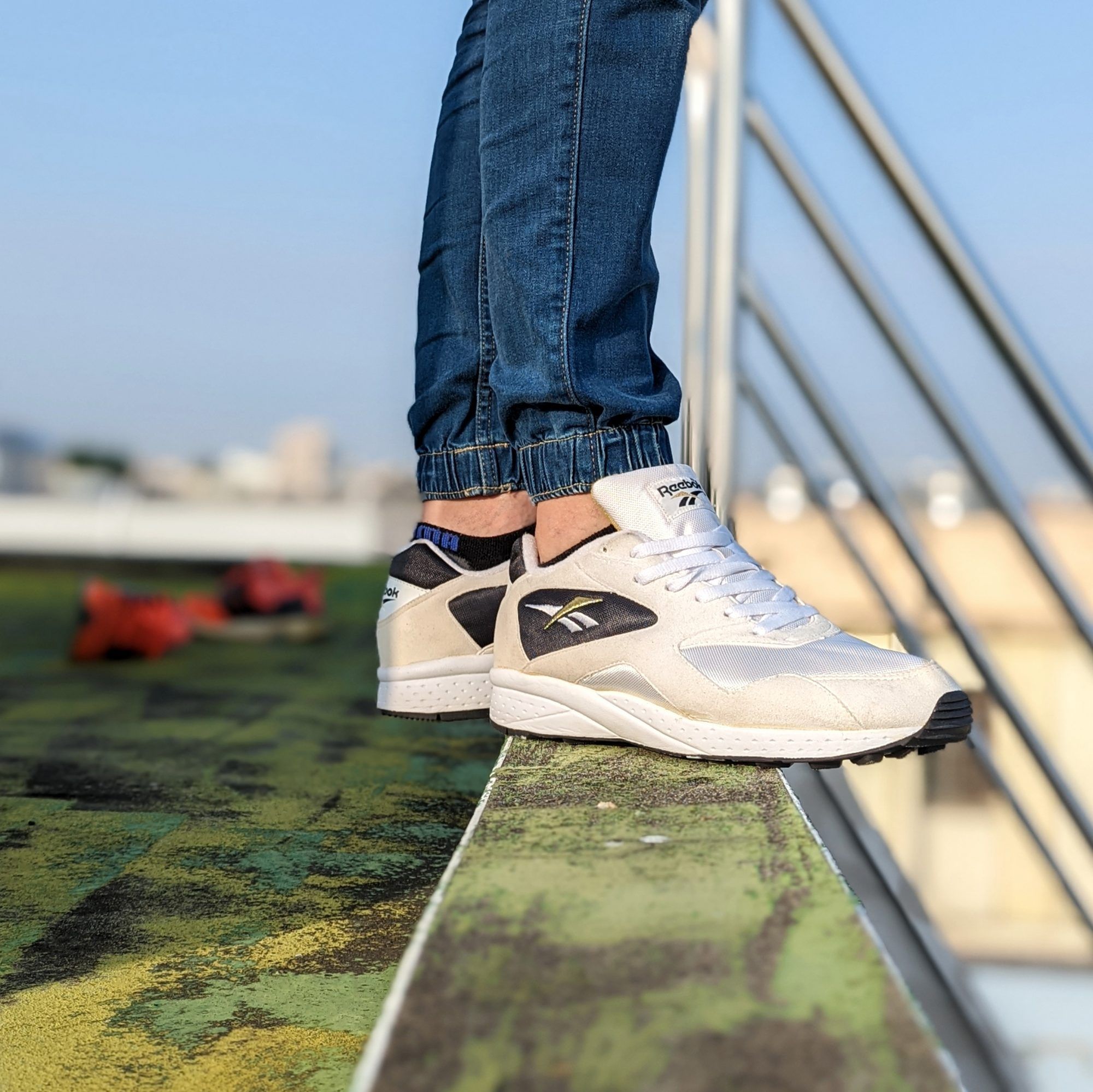 In this edition of the Lost Reviews, we are taking a closer look at one of Reebok’s staples from the mid-90s. Dubbed the Torch, this model was positioned as the economic option in Reebok’s growing trainer portfolio. Devoid of fancy tech, this was nonetheless entry level equipment done right. For this review, thanks go out to Ian Robinson, who provided invaluable insights based on his experience selling these back in the day!

The Reebok Torch isn’t too obscure nowadays thanks to some lovely retros released in recent years. However, what few know is that these „Hex Torch“ are actually different from the original, which lacked the Hexalite-infused midsole. This design-decision was of course pragmatic at heart, as it resulted from considerations of scalability rather than upgrading the model; having just released the Pyro retro a year earlier, Reebok simply stuck the same, already mass-produced midsole on the revamped Torch upper and added Hex to the name. Simple economics, eh?!

Historically, however, this distorts the Torch’s original positioning within Reebok’s early to mid-90s range. Although first and foremost known for its success with the Pump range, Reebok back then had also successfully repositioned itself as a running brand. First up in 1992 was the aforementioned Pyro and the 1993 Aztrek, both of which featured the newly-developed Hexalite technology in their midsoles for a responsive yet well-cushioned ride. Hexalite itself back then was a novel material known for its flexible yet robust honeycomb structure. Similar to Kangaroos’ Dynacoil tech, Hexalite, too, supposedly originated with NASA, which according to marketing lore used it in space shuttles to minimize impact upon re-entry into the atmosphere. Maybe add a grain of salt to that for good measure!

Be that as it may, Hexalite essentially succeeded Reebok’s own ERS cushioning, or Energy Return System. It was also the brand’s answer to Nike’s growing success with hidden and visible Air units in its runners. Much lighter than DuPont Hytrel-based ERS, and sturdier and ultimately longer lasting than Nike Air’s PU capsules, Hexalite’s prominence only suffered from a lack of marketable visibility within the sole unit. Nonetheless, this served as the high tech option serious runners could choose if they were willing to spend cash. For the rest, basic EVA midsoles such as the one found on the Torch would do just fine.

The Torch, which was released in 1994 at a hard-to-beat £45 price point, essentially helped Reebok maintain its stronghold in the lower market segment in Europe and the UK in particular. Similar to the Reebok Classic, the Torch was destined to dominate tracks, school grounds and arcades alike as economic turmoil called for frugal spending in many families. Thanks to its modern look and modest price point, Reebok’s Torch became a hit with the casual running crowd. More so, in line with Reebok’s long-standing knack for releasing lifestyle versions of their shoes, the model was also released in a quasi-premium edition that featured a classy leather upper atop the shared midsole.

Looks-wise, the Torch didn’t disappoint either. Clearly of the same mold as the Pyro, the Torch was shaped almost aerodynamically. Unlike the Pyro, however, which saw the Reebok logo spanning across the lateral side, this model featured a slightly more minimalistic approach. Much smaller branding was placed on the shoe’s outer side, the tongue, as well as the heel cup to create a rather subdued style. The midsole – from the outside – is the exact same unit found on the Reebok Pyro, yet a glance at the outsole reveals the lack of Hexalite. Interestingly enough, thanks to the quality of the compression-molded EVA mid, the difference in comfort is smaller than one would expect.

On this model here, we see a mostly white upper with black accents on the sides and heel cup. The logos on the lateral and the tongue feature gold details that harmonize well with the yellow lining found on the shoe’s inside. The heelcup features a two-time embossed branding on faux leather. When it comes to materials, Reebok naturally went for tried-and-true staples that allowed it to exert cost control. This is not a bad thing per se, though, as the Torch doesn’t cut any unnecessary corners. The upper is made of standard felt for the mudguard and nylon mesh on the toebox, while the inside lining features an almost plush padding. Nothing fancy, but very lightweight and ensuring a snug fit.

All in all, the Reebok Torch achieved what its designers set out to do: provide a comfortable entry level runner that did not break the bank and appealed to different audiences. Full of pragmatic decisions, this model nonetheless founds its niche within Reebok’s mid-90s lineup of superstar models. So much so that it even got its own upgraded retro some 25 years later!