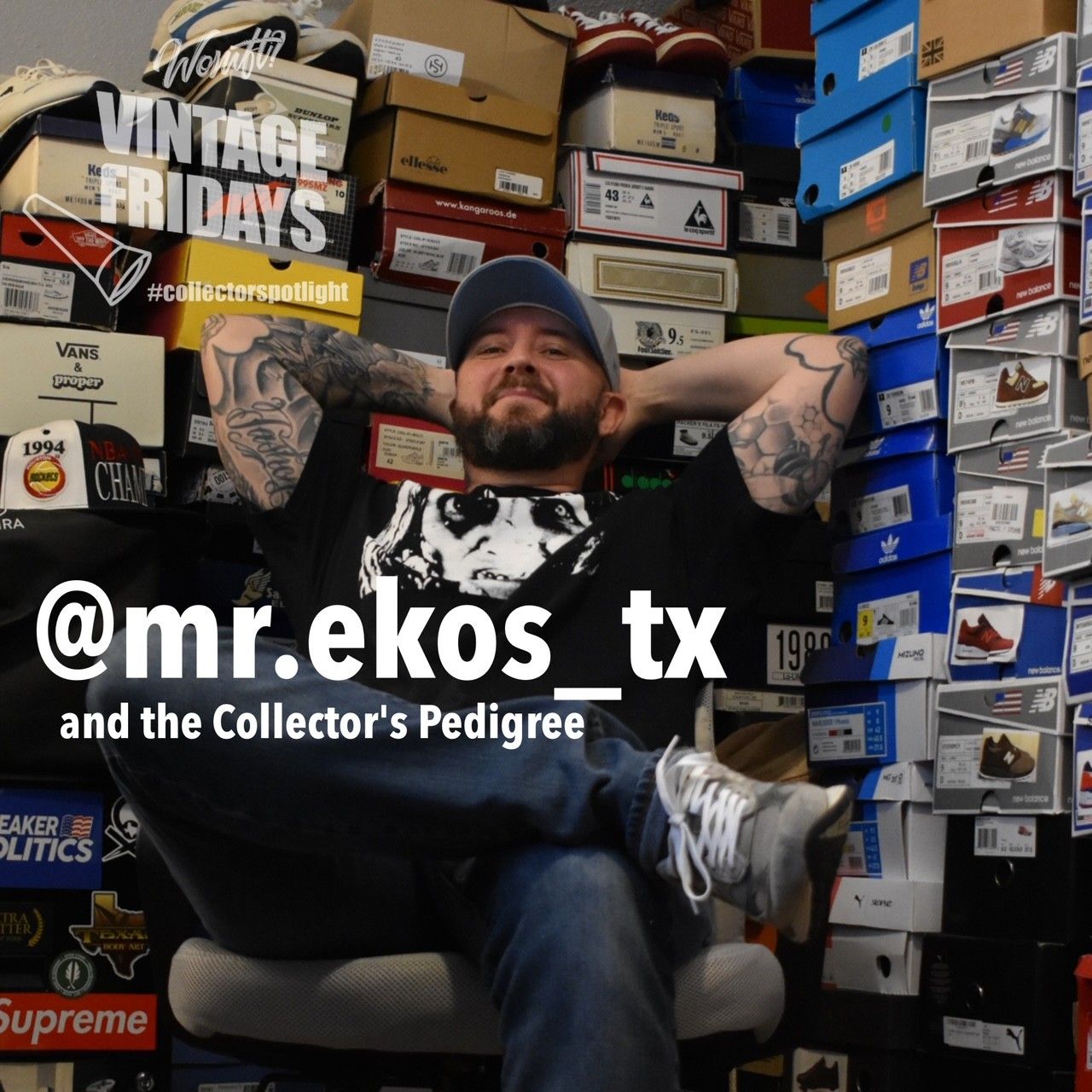 In this installment of the Womft? Vintage Fridays Collector’s Spotlight we are heading straight to Houston, Texas, where we meet Zachary. Better known by his IG handle @mr.ekos_tx, Zach has an equally deep and eclectic collection that is rooted in a long-standing interest in sneakers. Be it new releases from hype brands, obscure models, or rare vintage kicks, he has amassed a true treasure trove maxing out at almost 500 pairs. Although never one to be put into a box, he’s also emerged as one of the foremost Nike ACG collectors in recent times. This prowess shouldn’t come as a surprise to those that know him, however. Zach actually grew up in a family of collectors and is equipped with what can only be described as collector’s pedigree!

See, although the United States are usually framed within the trifecta of its metropoles, American culture is much more than the Big Apple, Chicago, or LA. At the very least, there’s a bifurcation between urban centers and more rural regions in between. It is the latter that makes up the vast majority of the nation and shares in a unique way of life informing distinct local traditions. In the cultural overlap between urban centers and rural or semi-urban regions one can however find a vibrant collectors culture: particularly in the Midwest or the Dirty South, plenty of folks exhibit a knack for antique tidbits as well as extremely focused specialties. This is sourced oftentimes through visits to estate and garage sales, as well as to the many thrift and antiques stores one can find throughout the fifty states.

According to Zach, the majority of his family actually has been involved in this game one way or another, thus heavily predisposing him from very early on: „When I was growing up my grandmother was an antique dealer with a massive collection of old art, advertisements, gadgets, you know, stuff like that. My mother then had a lot of the same, but she turned to focus more on collecting vintage toys, something she still does to this day. Even my Grandfather was in the game. He collected model trains and built a collection that was so well respected that it is now on permanent display at the Railroad Museum in Galveston, Texas.“

Zach himself initially accumulated toys such as action figures, yet he admits that from early on he gravitated towards sneakers, too. To be sure, that wasn’t necessarily something the rest of his family – the OGs, so to speak – would understand. As he puts it, they mostly ignored it, at times even giving him „the feeling that … the whole thing is a bit silly and juvenile.“ This of course is something most sneakerheads can relate to, and there’s certainly a grain of truth to it. After all, what if not a nostalgic longing for our childhood is expressed by the act of finally obtaining the very kicks we could but admire back in the day? Be that as it may, Zach agrees that it is not necessarily a problem and adds that in his experience, „collectors typically focus on the things that interest them personally, all the while having a hard time relating to those who collect items from a different genre or category. Different strokes for different folks, right?“ Indeed!

His conscious interest in sneakers then began in the late 80s and early 90s, Zach explains. Interestingly enough, it was one of Kangaroos‘ eponymous „Shoes with pockets“ that piqued his interest. „The idea of having a pair of sneakers with a side pocket to stash change or your house key was just extremely appealing to me!“ But the definite turning point came in the form of the Jordan IV. Symbolizing Michael Jordan’s ever-growing popularity, this model began to conquer schoolyards and streets alike by 1989: „I think it was at this point that my focus shifted and footwear went from being something that I enjoyed, to something that I was wildly interested in.“

And in true fashion, Zach maintained his open-mindedness towards kicks, copping pairs from well-known brands such as Nike, Reebok, or Fila, to picking up more specialized or obscure trainers from Avia or Ellesse. As he puts it, the 90s „were a great time for sneakers because you would see a little bit of everything on people’s feet. Folks were a lot less prone to brand loyalty back then, which made for a great environment of diversity when it came to footwear. It was this environment that molded the way I operate as a collector today.“ Similar to many of us, Zach wasn’t able to buy everything he wanted back then, yet he dealt with it in a unique fashion thanks to his familiarity with the collector’s modus operandi: „There were loads of sneakers that I missed out on when I was younger, in fact … I definitely missed out on more than I scored, yet I was always watching and taking mental notes.“ Equipped with this mental notebook of sorts, Zach’s collecting fervor kicked into overdrive come the ascent of internet platforms such as eBay.

A large portion of his collection consists of recent pairs that are gems in their own right. Be it the coveted New Balance 574 x Spivack, the ultra-rare Sonra Proto „Grasshopper,“ or Crooked Tongues‘ brilliant last collaboration on the Reebok Classic Leather Lux, Zach’s stash holds plenty of „grails.“ Yet for him this is „a term that is widely misinterpreted and thrown around far too loosely.“ To be sure, there naturally are plenty of pairs he’s actively searching for, be it the Bodega ZX8000, or forgotten models of days yonder like the Avia 2070 and the 1986 Dunlop Whirlwind. However, for Zach a „grail“ ideally has a much deeper, intimate meaning, one that however discounts for the hunting aspect which is now its most prominent connotation: „If we’re talking about sneakers that mean a lot to me personally, based on their nostalgic value or my unique connection to them, then I can honestly say that I already own most of those.“

In general, Zach’s consciously trying to keep things diverse, pointing out that „I’ve always tried to avoid being classified as a specific “type” of collector. I’ve never wanted to be boxed in with a particular category, or for my name to become synonymous with one particular brand. I like shoes, end of story.“ Nonetheless, Zach admits that vintage kicks have a special place in his heart. For one, this is because of the aspect of quasi-excavation he likens to the work of an archaeologist: „There’s a feeling of excitement that comes with tracking down vintage pairs that can’t be matched with the newer stuff for me.“ To unearth these gems, Zach uses a wide variety of channels, including those he’s familiar with thanks to his upbringing. „I’ve always been a thrift junkie, so picking up shoes at garage sales, thrift stores, and estate sales is definitely not a rare occurrence for me.“ The internet then gave him even bigger access on an international level, allowing him to forage for rare pairs not only on eBay, but also Depop, Poshmark, or even Japanese platform Mercari. Says Zach, „I’ll get in wherever I can fit in you know?“

This process of digging relates to a second layer of meaning vintage kicks possess, one we previously touched upon in an earlier Editorial under the banner of „Patina.“ Describing it as an inimitable sensation of age and historicity, Zach thinks that „whether it be the glue stains, the cracked paint, or even that very unique smell that comes with new old stock when you first pull them out of the box…all of these characteristics tell a story, they create a sense of history that just can’t be found in newer releases or retros.“ Harking back to the archeologist simile, he philosophizes that „the feeling of holding a genuine piece of cultural history in your hands and pondering where it’s been, wondering about the journey it’s had before, and its original purpose, this is truly an unparalleled experience.“

Currently Zach’s vintage fervor to a large degree focuses on Nike’s All Condition Gear (ACG) range. Despite having seen a small revival in the wake of Nike’s recent (and very controversial) Air Mowabb retro, this line previously eked out a somewhat shadowy existence compared to other mainstays from the Oregon powerhouse. But this was part of the appeal for Zach, who liked ACG and Trail models for their obscurity in the Southern states at least. „I know there were areas of the US where ACG really caught on and there was a substantial fan base, like up north and on the east coast. But within my circle of friends, no one really had any interest. I just didn’t have anyone around me that I could relate to when it came to that particular subset of footwear.“ But this is what actually distinguishes the collector from, say, the Hypebeast. You don’t collect because others do it or like those items. Rather, it is an inner drive that keeps you going until you may or may not stumble across like-minded folks. Admits Zach, „I resigned myself to being an “in the closet” ACG collector for quite a long time, but years later I was able to find and connect with tons of other people on IG who shared my same passion for outdoor sneakers. Needless to say, those newfound relationships helped to propel my ACG collecting into overdrive these last few years.“

At the end of the day, Zach sees his collection as part of a bigger attempt to lead a meaningful life. Finding relevance in things that would otherwise drown in mundanity, he wants to educate and leave his mark. Be it through his IG account, where he also frequently shares snaps of his beautiful family, or via short videos that frame his latest pickups in their historical context, Zach allows others to take part in his spiritual journey. Based on his understanding, the collector’s pedigree must therefore be understood as a mindset that allows people to find what works for them: „When it comes to collecting, don’t be afraid to try new things, nor should you be afraid to humble yourself and change your preconceived opinion about something. Just like with everything else in life, there’s a beauty in diversity and new beginnings!“