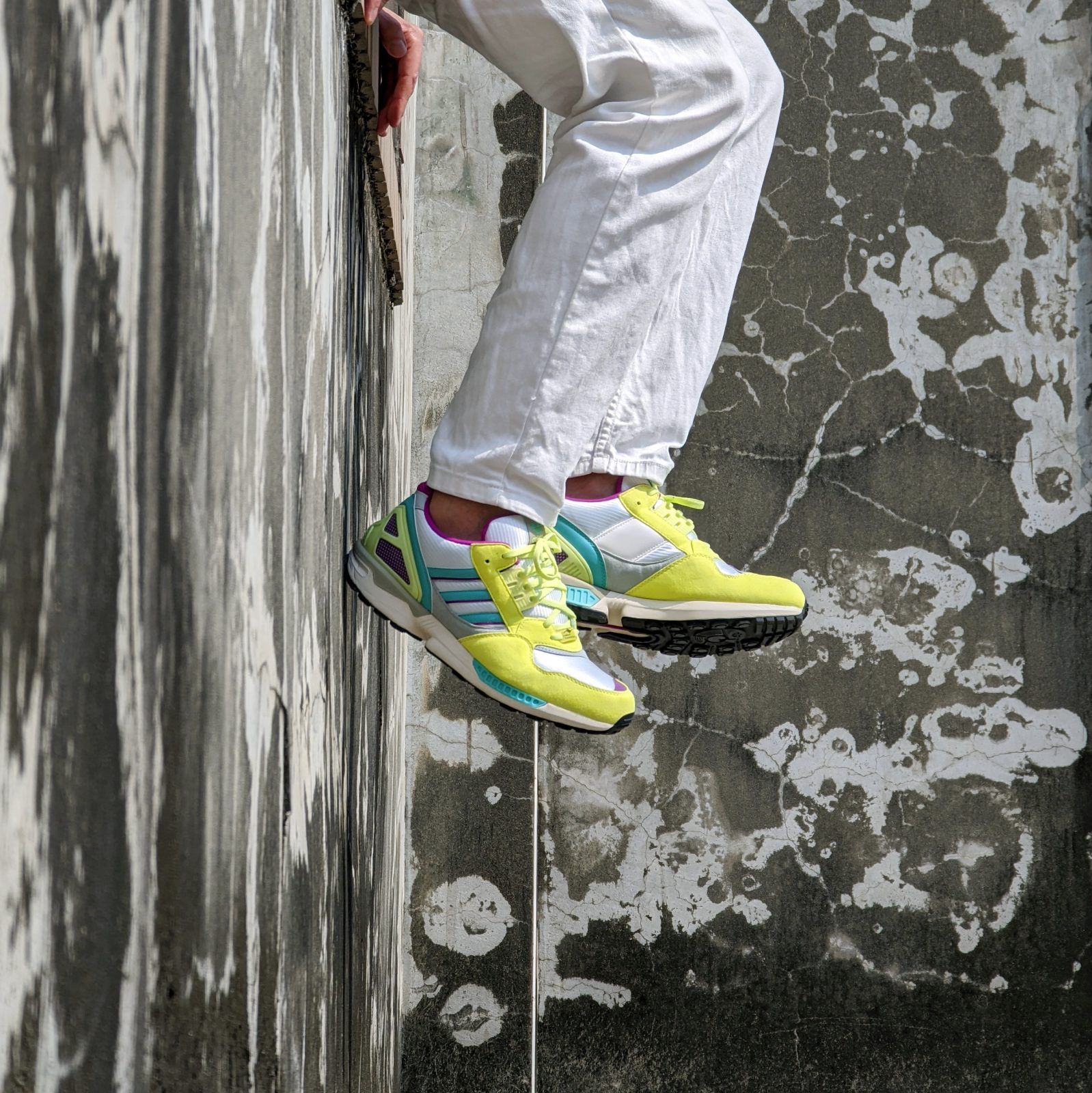 The Adidas ZX range has seen a plethora of different models over the last two plus years. Some fan favorites like the Aqua and Hydra, plenty of new collaborations as part of the AZX program, and quite a few uninspired releases, too. Interestingly enough, Adidas have kept one of the most coveted retros for a time when many fans are already starting to get annoyed with the unabated barrage of new CWs. Be that as it may, the ZX9000 „Citrus“ is finally back in its first official (read: non-fugazi) retro outing following the original release in 2008. Sadly enough, it’s not all hunky dory in Herzogenaurach!

The original ZX9000 from 1989 is of course best known in its OG iteration colloquially known as Hydra. It is, however, closely followed by the Citrus, and it was this cw that coincided with the release of the first AZX project back in 2008. Interestingly enough, rumor has it that the Citrus was initially slated to be released as part of that massive project. However, with two collaborations from greats Crooked Tongues and Wood Wood already taking place on the ZX9000 silhouette, the Citrus ended up being a GR release.

What may be even more surprising is the fact that this arguably fantastic cw sat on shelves initially. What with the AZX project in the limelight, fans didn’t see much potential in a general release. More so, although the colorway strikes us now as rather forward thinking and ingenious, a look at the Crooked Tongues and Wood Wood collaborations reveals that the late 00s were not about vibrant multi-color arrangements, but more about clever color blocking. In the end, the Citrus only became a top shelf sneaker coveted by fans around 2015, i.e. a time when other brands also began to embrace the vibrancy exhibited by this ZX9000’s upper. The rest is of course history, including maddening resell prices up to 700 Euro for NOS pairs.

Looks-wise, the Citrus was and remains a winner. Its fresh yellow upper harmonizes with the turquoise on the lateral stripes, the heel, and the shoes painted on stability elements. Add to that the white mesh of the toebox, the silver accents, as well as the ingenious purple inner lining, and you got a shoe that is impressively well-balanced aesthetically. The dual density EVA midsole and durable black outsole further enhance this look, making the Citrus at least as enduring a colorway as its AZX brethren.

On the 2022 retro, this formula is largely maintained, with slight but controversial tweaks here and there. Compared to the warmer colors of the ’08 original, the new iteration uses the lighter palette introduced with the 2020 Aqua GR retro. Colors are vibrant, and the yellow, turquoise, and purple in particular still harmonize exceedingly well. The fabric alignment is mostly truthful to the 2008 OG. However, it differs on the inside laterals, where a ZX8000-esque pattern is used rather than the typical ZX9000 one, much to the chagrin of connoisseurs!

This model also uses the new ZX mids with Boost. While this mid certainly enhances comfort, it also increases the overall height of the shoes, leading to a somewhat bulkier look. More so, although the inclusion of actual stability elements at first seems like a great idea, the fact that they are glued on and thus prone to dysfunction down the road plainly outweighs the benefits. Finally, for the retro Adidas included a glow-in-the-dark paint hidden within the turquoise accents. Nothing anybody wanted, but luckily also not immediately visible or constraining the overall look.

Amongst ZX aficionados, however, these changes (or upgrades, as Adidas would probably call them) are not so well-received, to say the least. The shape is disliked by many, as is the updated color palette. Although this may smack a bit of gatekeeping by those who are lucky to own the 2008 OG, many criticisms should be taken seriously in Herzogenaurach, particularly the ill-designed stability elements issue.

Less important, but still adding to three general impression of bewilderment, is the confusion surrounding this release. Originally intended as a Consortium model for January 2022, the retro was downgraded to a GR status. More so, with the exception of a limited release on Adidas Canada (where our pair is from), the launch was, as rumor has it, moved to April due to supply chain constraints. In sum, one gets the impression that in Herzogenaurach most don’t really understand for what audience this retro should be for, and what that very particular community craves.